Now that the 2nd chiller thriller or Arctic Vortex has hit the US and ice and snow continue to blanket the northeast, many people might be concerned about the extreme, unrelenting winter weather pattern developing. With utility rates already a burden on so many, the forecast for long-term, extremely low temperatures is discouraging if not even alarming.

Nearly every news organization has articles published on their blogs, websites, newsletters, etc. about current extreme weather conditions along with the continual and hotly contested global warming/cooling debate.

So the issue of today’s weather patterns and climate is raising questions as to the cause and reason for this harsh environment.

Certainly we understand that the earth’s climate is a vast and complex machine that is for the most part a system without guides, governors, and stops. In other words, the boundaries and limits are not immoveable walls and gauges to keep the mechanism contained. Consequently, weather measurement records should be expected to spill over the edge on occasion.

But a barrage of blows that seem to be out of the ordinary and that are so severe they have the ability to change human behavior needs to be looked at closely. If the climate shifts so far from the norm that is causes significant adjustments and adaptation to historical coping methods, a life-altering phenomena has arisen and needs to be addressed and examined in-depth.

Now there are some factors that can affect the climate that are completely outside of earth’s influence such as solar activity and to a varying degree, other cosmic anomalies. Along with these would be naturally-occuring and random cataclysmic events such as volcanic eruptions and other sub-surface geological activity that for the most part rarely occur. Also to a large degree, oceanic activity such as deep-water currents and thermal venting function for the most part independently.

On the surface of the earth however, there is the fluid and ever-changing environmental climate of the atmosphere where wind, waves, water, clouds, sunlight, heat, cold, etc. mix their ingredients to create a habitat for life as well as a stew for storms.

But here, the cause and effect requires an additional factor to the equation and that of course is the activity of man. The prevailing questions focus on alterations made to the environment by way of human development, deforestation, roads, bridges, highways, dams, mining and extracting, waste management, power production, industry, transportation, and consumption just to list the basics. These are and have been the hot buttons for the global warming and carbon footprint alliances. 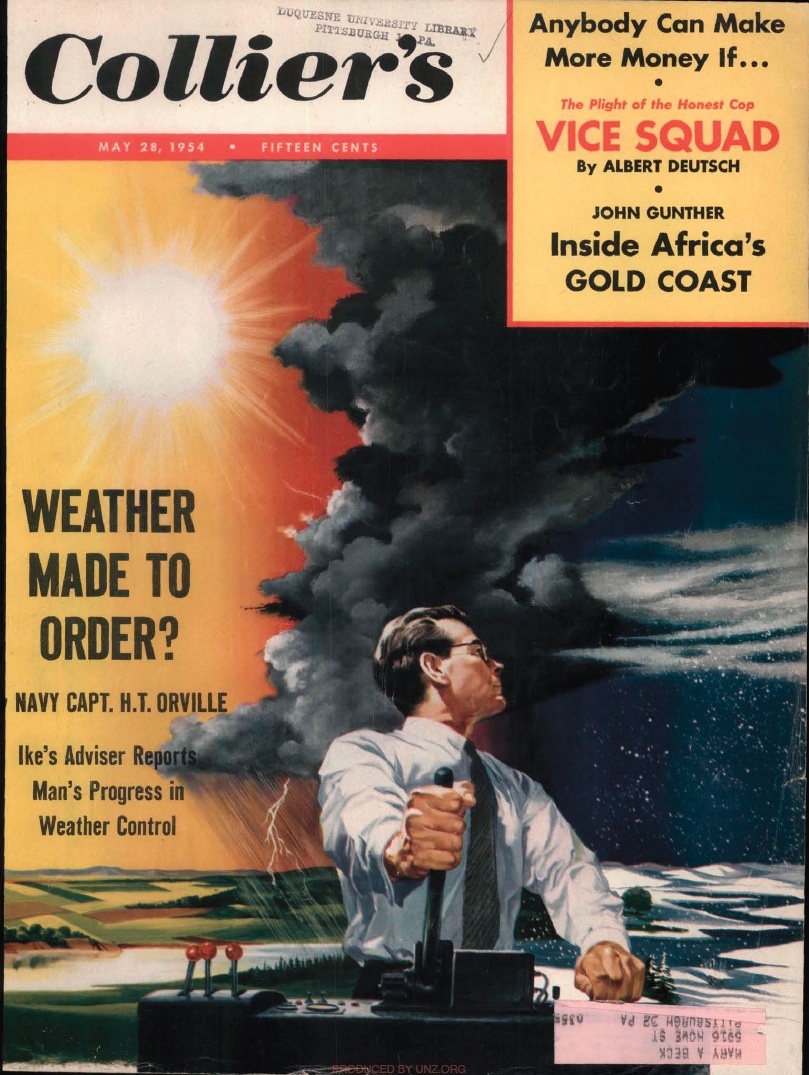 What has failed to be added to the previous list of weather and climate altering activities by humans is the deliberate altering and modifying of the climate for political, military, and scientific purposes. This is being done for the most part by national governments for political reasons and to a smaller degree by corporations for agricultural purposes.

It might be a revelation to some but the technology exists to alter and even create weather systems that move fronts over the surface of the earth by heating and cooling different areas of the atmosphere, stratosphere, and ionosphere. The HAARP (High Frequency Active Auroral Research Project) antenna field in Alaska has directional capabilities to move the atmosphere on a guided path by heating the ionosphere where it is aimed.

In addition to its high-frequency capabilities, it also has an ELF range (extremely low-frequency) that not only can communicate with deep-diving submarines but read subsurface geographic features for oil deposits, caves, tectonics, and hidden underground military installations.

The U.S. military’s first target is the electrojet: a river of electricity that flows thousands of miles through the sky and down into the polar icecap. The electrojet will become a vibrating artificial antenna for sending electromagnetic radiation raining down on the earth. The U.S. military can then “X-ray” the earth and talk to submarines. But there’s much more they can do with HAARP. This book reveals surprises from secret meetings. –  Book Topic: Angels Don’t Play This HAARP

How to make an earthquake

What was discovered early on while exploring for oil was the earthquake-generating capability as a result of frequencies causing powerful underground vibrations that could release the tension points on fissures.

And if the previously mentioned abilities of HAARP related technologies aren’t frightening enough. let us not fail to mention the aspect of human behavior modification and mind control that, according to Dr. Nick Begich, Dr. John Hall, and Dr. Barry Trower is currently tested on the non-consenting populace.

This is a form of electronic assault and harassment which is related to smart meter, electromagnetic wave effects discussed in-depth by Deborah Tavares, an associate of www.StopTheCrime.net

Another noticeable method — at least to the observant — of weather modification is cloud-seeding, better known as chemtrails. This is the deliberate and systematic spraying of nanoparticulates of aluminum, barium, and other, essentially dust particles of metals and materials. Though the reasons given for cloud seeding varies from source to source, it is obvious that it is for environmental purposes and not necessarily for the good of it. Some say the resultant grid in the sky helps HAARP operators more easily recognize weather and wind movement. Still others suggest purposes even more nefarious such as the intentional contamination of soil, plant and animal life, and the air we breath.

If this information is a new revelation to you of things being done to us and the world in which we live in the name of science, military, and political control, I encourage you to watch this video. This will provide a much clear picture of the overall agenda, the methods used to modify the weather and control climates, and the technologies involved in doing so.

“Why in the World are They Spraying?” NEW Critically Acclaimed Documentary [HD FULL]