Best Inventions of the Year 2012- techland.time.com

Just When You Thought Google Glass Couldn’t Get Creepier: New App Allows Strangers to ID You Just by Looking at You
by John Boone

A new app will allow total strangers to ID you and pull up all your information, just by looking at you and scanning your face with their Google Glass. The app is called NameTag and it sounds CREEPY.

via Just When You Thought Google Glass Couldn’t Get Creepier: New App Allows Strangers to ID You Just by Looking at You | E! Online.

Google Glass have been in the news for nearly 2 years now as a Google search result shows an April 2012 article displaying the workings of the product. Since then, there has been a steady stream of articles on Google Glass discussing availability, pricing, features, technology, and privacy issues.

Best Inventions of the Year 2012- techland.time.com

From the outset we understood that this device is essentially a miniaturized computer screen displayed directly at eye position on eyeglass frames not so different from any pair of spectacles. Built into the frame is a camera lens nearly identical to the camera lens in a cell phone. A rather nifty gadget we might initially think until the technological capabilities of today’s high-speed, information highway and virtual reality is added to the mix.

Much of our lives are now recorded in bits and bytes in various places on the Internet. Some more obvious cyber societies are Facebook, Yahoo, Twitter, Google, and perhaps an online shopping site such as Amazon or Ebay. But this is only a portion of the trail of “virtual DNA” we’ve left behind in our surfings on the world-wide web. Just about any website whether it be financial, social, commercial, or recreational requires a membership to have access to the available features and content.

So in addition to the most recognized Internet sites that contain your personal information, there are sites as well for news and commentary, personal blogs and online photo albums, dating and chat services, and many more.

What then if there is technology that combines a persons online personal information together into a systematic, accessible, and identifiable presentation. What if everything we’ve made public on the Internet can be accessed by attaching our unique facial characteristics to our name, address, telephone number, age, sex, religion, political affiliation and so on and so forth.

Now this is where the technology of Google Glass can get a bit disconcerting. What we are talking about is facial recognition software that is running on Google Glass and can be used to capture and process a person’s ‘facial signature’ for identification. By applying the facial recognition software to a captured image of a person, the application can search a photo or profile database to retrieve the associated information and details of the matched image.

This is an alarming but very real possibility and needs a thorough analysis as to the potential dangers of a complete strangers having instant access to your personal information. 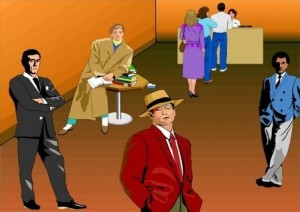 Many of us understand that we have moved into a society where 24/7/365 surveillance is everywhere and the government has become fearful of and oppressive to its citizens. We are becoming a society not so different from Nazi Germany where people are marked and targeted as dissidents, activist, whistleblowers, and resistors of corrupt and abusive governments and the terroristic police state they have become.

With these disturbing considerations in mind, we must foresee and conclude that those who would operate and apply this kind of pervasive, violating, and voyeuristic technology against unsuspecting and non-consensual and innocent persons are equivalent to Nazi Brownshirts and Stasi Informants.

Remember Obama’s speech before his first election? Where he said, “We need a Civilian National Security Force that’s just as powerful, just as strong, and just as well-funded as the military.” What does Obama need this force for? What would be their purpose? It would seem reasonable to conclude that this “security force” is not at all for the security of the people, but for the security of the government.

Those who will used this facial recognition software for their own sadistic pleasure or for government spying are stalkers. With wearable camera lenses that provide facial recognition and instant identification, a Civilian National Security Force of government-sanctioned stalkers could result in a network of community informants and neighborhood snitches used to round-up the targeted individuals of a nation.