THIS IS A MUST READ

Excerpt:
“People say, “What’s the purpose of it?” My best guess is that the purpose of it is that they want an army of Manchurian Candidates, ten of thousands of mental robots who will do prostitution, do child pornography, smuggle drugs, engage in international arms smuggling, do snuff films, all sorts of very lucrative things and do their bidding and eventually the megalomaniacs at the top believe they’ll create a Satanic Order that will rule the world.” – D. C. Hammond

THE GREENBAUM SPEECH of D.C.HAMMOND’ – Hypnosis in MPD: Ritual Abuse (This intro from:http://www.bibliotecapleyades.net/sociopolitica/esp_sociopol_mindcon03.htm)

The single most remarkable thing about this speech is how little one has heard of it in the two years since its original delivery. It is recommended that one reads far enough at least until one finds why it’s called “the Greenbaum speech.”

We’ve got a lot to cover today and let me give you a rough approximate outline of the things that I’d like us to get into. First, let me ask how many of you have had at least one course or workshop on hypnosis? Can I see the hands? Wonderful. That makes our job easier.

Okay. I want to start off by talking a little about trance-training and the use of hypnotic phenomena with an MPD dissociative-disorder population, to talk some about unconscious exploration, methods of doing that, the use of imagery and symbolic imagery techniques for managing physical symptoms, input overload, things like that. Before the day’s out, I want to spend some time talking about something I think has been completely neglected in the field of dissociative disorder, and that’s talking about methods of profound calming for automatic hyper-arousal that’s been conditioned in these patients.

We’re going to spend a considerable length of time talking about age-regression and abreaction in working through a trauma. I’ll show you with a non-MPD patient — some of that kind of work — and then extrapolate from what I find so similar and different with MPD cases. Part of that, I would add, by the way, is that I’ve been very sensitive through the years about taping MPD cases or ritual-abuse cases, part of it being that some of that feels a little like using patients and I think that this population has been used enough. That’s part of the reason, by choice, that I don’t generally videotape my work.

I also want to talk a bunch about hypnotic relapse-prevention strategies and post- integration therapy today. Finally, I hope to find somewhere in our time-frame to spend on hour or so talking specifically about ritual abuse and about mind-control programming and brainwashing — how it’s done, how to get on the inside with that — which is a topic that in the past I haven’t been willing to speak about publicly, have done that in small groups and in consultations, but recently decided that it was high time that somebody started doing it. So we’re going to talk about specifics today.

In Chicago at the first international congress where ritual abuse was talked about I can remember thinking, “How strange and interesting.” I can recall many people listening to an example given that somebody thought was so idiosyncratic and rare, and all the people coming up after saying, “Gee, you’re treating one, too? You’re in Seattle”…Well, I’m in Toronto…Well, I’m in Florida…Well, I’m in Cincinnati.” I didn’t know what to think at that point.

via The Greenbaum Speach – Hypnosis in MPD: Ritual Abuse. 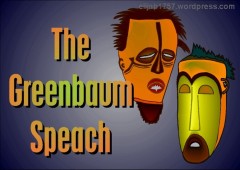 The image associated with this article has the two mask which connote a split in identities or personalities. I believe this image is very fitting to the entirety of this topic as this is how the programmers or abusers are able to control the individual by way of breaking apart their identity. This is why you have heard the terms, dissociative identity disorder, split or dual personality, multiple personality, schizophrenia, and more recently, bi-polar disorder as well as others. Of course the two masks in the image are not confined to just a split in identity, but represent multiple identities as well.

Following, is a portion of the Dr. Hammond’s dissertation that speaks directly to an incident where a patient demonstrates perfectly the existence and to a degree, nature of the breaking up of the psyche or splitting off of identities.

Included is a larger portion of the content being addressed so that you may better understand where he was coming from and the lead-in to this particular patient’s circumstance which are italicized below. The compelling statement in emphasis is in bold type. And this point, he is answering a few questions from the audience.

People say, “What’s the purpose of it?” My best guess is that the purpose of it is that they want an army of Manchurian Candidates, ten of thousands of mental robots who will do prostitution, do child pornography, smuggle drugs, engage in international arms smuggling, do snuff films, all sorts of very lucrative things and do their bidding and eventually the megalomaniacs at the top believe they’ll create a Satanic Order that will rule the world. One last question. Then I’ll give you couple of details and we need to shift gears.

Q: You have suggested and implied that at some point at a high level of the U.S. Government there was support of this kind of thing. I know we’re short of time, but could you just say a few words about the documentation that may exist for that suggestion?

Dr.H: There isn’t great documentation of it. It comes from victims who are imperiled witnesses. The interesting thing is how many people have described the same scenario and how many people that we have worked with who have had relatives in NASA, in the CIA and in the Military, including very high-ups in the Military.

I can tell you that a friend and colleague of mine who has probably the equivalent of half the table space on that far side of the room filled with boxes with declassified documents from mind-control research done in the past which has been able to be declassified over a considerable — couple of decades — period and has read more government documents about mind control than anyone else, has a brief that has literally been sent in the past week and a half asking for all information to be declassified about the Monarch Project for us to try to find out more.

Now let me just mention something about some of the stuff that my experience is in several patients now that you may run into late in the process. I know I’m throwing a lot at you in a hurry. Some of it is completely foreign and some of you may think, “Gosh, could any of this be true?” Just, you know, ask. Find out in your patients and you may be lucky and there isn’t any of this. Somewhere at a deep level you may run into some things like this. Let me describe to you, if I can find my pen, the system in one patient. One patient I had treated for quite a while, a non-bloodline person.

We had done what appeared to be successful work and reached final integration. She came back to me early last year and said she was symptomatic with some things. I started inquiring. I found a part there we’d integrated. The part basically said,

“There was other stuff that I couldn’t tell you about and you integrated me and so I had to split off.”

I had done some inquiring about things like Alpha, Beta as a routine part of it and found they were there and I said to this part,

“Why didn’t you tell me about this stuff?” She said, “Well, we gave you some hints but they went right over your head.” Says, “I’m sorry, but we know that you didn’t know enough to help us but now we know you can.”

So the stuff started coming out. It was interesting.

She described the overall system — if I can remember it now — as being like this.

The circle represented harm to the body, a system of alters whose primary purpose was to hurt her including symptoms like Munchhausen’s, self-mutilation, other kinds of things.

Each of the triangles represented still another different system.

She said, “With the exception of me,” this one part, “you dealt with the whole circle with the work that we did before but you didn’t touch the rest of the stuff.”

As I was reading this, I came to the part where the patient—who was addressing herself as ‘we’—said she/we ‘had to split off.’

Now perhaps it was the Holy Spirit that spoke to me as I read this and made the connection to people in the Scriptures being ‘made whole’ by Jesus.

22 And, behold, a woman of Canaan came out of the same coasts, and cried unto him, saying, Have mercy on me, O Lord, thou Son of David; my daughter is grievously vexed with a devil. 23 But he answered her not a word. And his disciples came and besought him, saying, Send her away; for she crieth after us. 24 But he answered and said, I am not sent but unto the lost sheep of the house of Israel. 25 Then came she and worshipped him, saying, Lord, help me. 26 But he answered and said, It is not meet to take the children’s bread, and to cast it to dogs. 27 And she said, Truth, Lord: yet the dogs eat of the crumbs which fall from their masters’ table. 28 Then Jesus answered and said unto her, O woman, great is thy faith: be it unto thee even as thou wilt. And her daughter was made whole from that very hour. – Mat 15:22-28 KJV (Emphasis mine)

Doctor Hammond, and I suppose the psychiatric profession as a whole—if I am not mistaking—uses the term Integration to describe the process of putting the patients identities back together. From the above content, Dr. Hammond says, “We had done what appeared to be successful work and reached final integration.”

What does a child think?!

By the way, I would encourage you parents or anyone who would have the opportunity to read nursery rhymes to young children, to avoid the story of Humpty Dumpty. Though in casual observance it seems benign, deep within lies the frightening reality of utter finality that any child which has seen an egg fall from the hands of his/her own mother and crash in a splat on the kitchen floor might grasp to his/her own, the horror of eternal death; that this complete reality is exemplified in no better way than the impossibilities of putting a smashed and broken egg and shell back together again.

All ways be vigilant to the poisoning psychological influences that are hidden in fairy tales as well as the society as a whole.

And with digressions aside, we turn again to Jesus, the Great Integrator of mankind. He who makes the blind to see, the deaf to hear, and the mute to speak. He who make the lame walk and the leper to be cleansed. He who rescues the lost sheep and even raises from the grave. Who casts out demons and washes away sins.